Ever wondered what the effect would be of tilting you LED spot light design over a certain angle with respect to thermal behavior?

In this whitepaper we describe the effect of tilting spot light designs over an angle of 50 degrees and 90 degrees, and compare the thermal results from LED coolers made by extrusion and made by pin fin technology.

The ModuLED 9980 is a passive LED cooler from extruded aluminium with a diameter of 99mm and a height of 80 millimeter, thermal resistance under vertical position 1.02°C/W

The LPF11180-ZHE is a passive LED cooler with pin fin structure with a diameter of 111mm and a height of 80mm, thermal resistance under vertical position 1.07°C/W

So both LED coolers have a similar cooling performance under classic vertical position.
In this experiment we mount the same LED module from Tridonic, the Talexx Stark spot light module STARK-SLE-G3-19-3000-830-CLA on both LED coolers with thermal grease as interface
This Zhaga book 3 LED engine generates 30 watt of power

In CFD thermal simulation we change the gravity orientation to get a first impression of the expected results
The gravity simulated angles are 0°, 50° and 90° 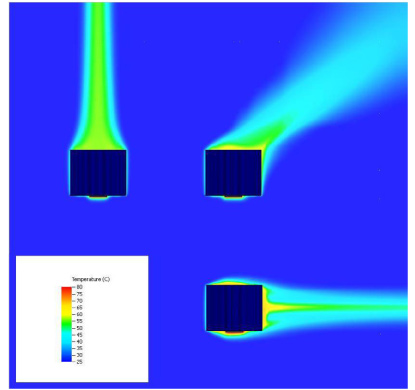 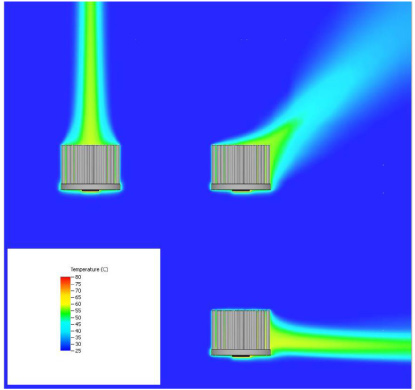 Under vertical position both coolers give a similar result, but the heat is more concentrated in the middle from the pin fin LED cooler compared with the extruded LED cooler.
This effect is seen because of the massive aluminium in the center of the extrusion and the more spread out heat over the fins, while the pin fin LED cooler has a more open structure in the center of the design.
But cooling wise this gives exactly the same result, both coolers show a temperature on the Tc point of the Tridonic LED module of 57°C
Once tilting the modules over an angle of more than 50 degrees, the pin fin LED coolers keeps on functioning while the extruded LED cooler loses more than 20% of the original cooling capacity.

To verify the results of the CFD thermal simulation we made an experimental setup where the LED cooler with the LED module can be tilted from pure vertical position all the way up to a horizontal 90 degrees position.
The temperature was measured by 2 calibrated thermocouples on the Tc point of the LED and in the center upper part of the LED heat sink. 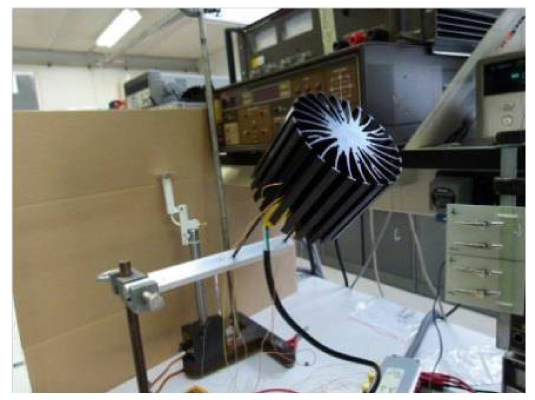 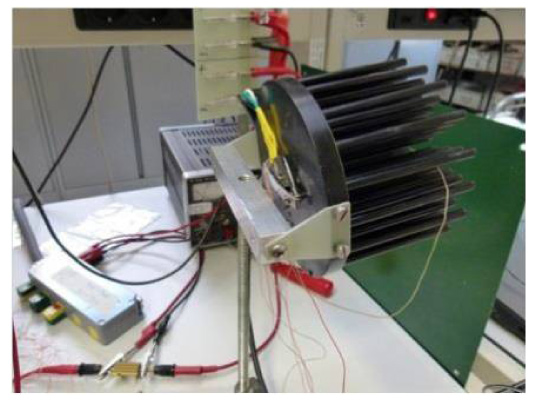 Up to a tilting angle of 50 degrees the results measured on both LED coolers stayed comparable.
Once tilting over 50 degrees, the bottom side of the extruded LED cooler loses more and more cooling capacity.
Since there is no forced air movement, the free air convection cooling is the main component of cooling in this way, and the radiation effect only counts for a few percent.
While the hot air wants to rise vertically, the open structure of the LED pin fin cooler makes that the air can still move up without obstructions 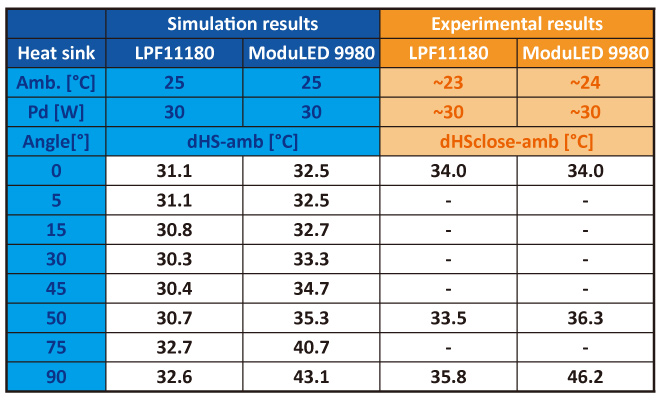 As a conclusion you can see that pin fin LED coolers perform better under a tilted position of more than 50 degrees than an extruded LED cooler.
Even under a 90 degree orientation the cooling capacity stays almost the sameThat makes pin fin LED coolers ideal for spot lighting with tilting possibilities and track lighting designs

We would like to thank our partner Optimal Thermal Solutions for the test results of this experiment.
When you experience challenges with regards to thermal results during your LED lighting design we are always at your service for consultancy or a full thermal verification of your LED fixture. 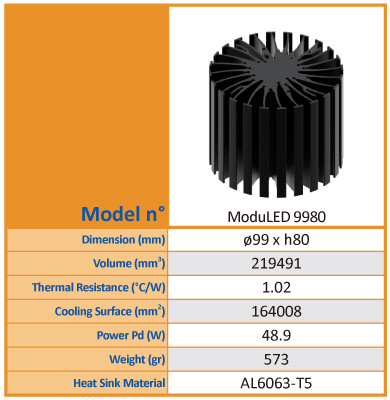 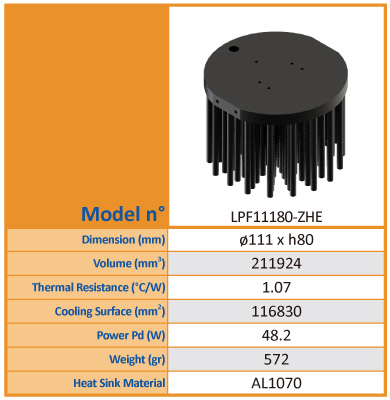 OTS offers several services in the field of thermal management with regards to training and development.
All our services are aimed in solving your product specific cooling solution.
Whether it is an LED light you require assistance with or cooling an IGBT for a rail vehicle, OTS has the proper knowledge and experience.