Many people still see a LED cooler as a piece of aluminium with some ribs on it. The more ribs they have and the more surface they create, the better the result would probably be. The truth is far off from this. In many LED cooling designs, there are just too many ribs too close to each other, making that the air between those ribs gets almost to the same temperature as the ribs themselves,… and as we all know once there is no temperature difference any more between two materials, nothing happens any more. We really hope that in the near future people would look with different eyes to a LED cooler.

Here below is an introduction to the basic elements you encounter during cooling, and which have impact to the performance of a LED cooling design. 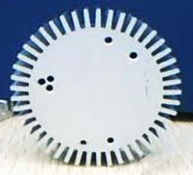 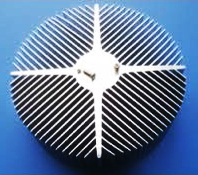 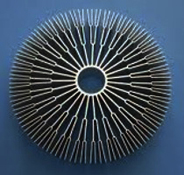 First of all the heat has to be “absorbed” from the LED COB or module towards the whole construction of the LED cooler. This effect is expressed as “conduction cooling”. The parameters which count here are the contact surface from the LED towards the LED cooler, the thermal conductivity of the material used, but also the inner construction of the heat sink. When pins or ribs are too small or too tight, the thermal energy will experience internal resistances against its will to spread through the construction. A massive block of aluminium would do best on conduction, but then the other cooling aspect here below would be at their minimum.

A second effect what occurs in passive cooling is called “convection”. This is probably the best known form of cooling. The temperature difference between the LED cooler and the air makes that the air in the close-by environment will heat up. Hot air wants to rise so cold air comes in place. What influences the efficiency of convection cooling is for sure the amount of surface you can create to touch the air. But also you have to keep in mind that you need space for the air. If the air gaps are getting too tight, then there are barely temperature differences between the cooler and the air, what makes that that area of the cooler you can see as actually not helping at all.

In the below illustration you can see that in many cases the outer side of a LED cooler has sufficient temperature difference between the aluminium and air, but all the inner parts is "dead zone", resulting in 35% of the whole mass not having any positive effect on the convection cooling.

A third aspect which is of major importance in non-forced air cooling, is the radiation effect. It is easy to underestimate the role of thermal radiation as a significant contributor to LED cooling in environments without forced air flow. If well developed, radiation cooling can contribute up to 40% of the total cooling capacity. The radiation is heavily influenced by the “visual” outer surface and the emissivity of the material. When you ever questioned yourself what anodizing or different surface treatments would do with the thermal performance of your LED luminaire, well it influences the emissivity and in that way the radiated cooling aspect. The more the emissivity coefficient nears in to 1, the more ideal. Pure aluminium has a good emissivity in the very beginning, but after a while when it gets corroded drops to below 0.5, while a black or clear anodized surface keeps its emissivity around 0.94.