While standardizations have been mainly focusing on retail and indoor lighting application, also the field of industrial lighting is undergoing a same move. Availability of standard building bricks lead to a shorter time to market, crucial in the hectic lighting world of today.

One of the newest and most popular platforms used for outdoor lighting applications is dubbed the 2x2MX platform. 4 high power LEDs (typical 10W), 4 groups of mid power LEDs, or 4 COBs are placed in a square to generate 4000 up to 6000 lumen, and that in a size as compact as 96x96 millimeter. The complete LED engine is IP67 waterproof after assembly, what makes it utmost suitable for outdoor applications like high mast luminaires, industrial flood lights or street lights. 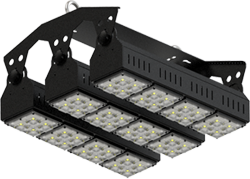 Standard led engines for the 2x2MX platform can be found from Lumileds (Luxeon XR-M), Osram (P10 2x2MX), Adura Sinkpad (wide variety of boards with Cree, Lumileds,…) and a further score of tier 1 suppliers. For the lenses a wide range of 2x2MX formats have been developed by Ledil, dubbed the Strada 2x2MX, with models made out of PMMA and made out of silicone in various beam patterns. Also COBs can be used on the platform instead of high power LEDs. With the CoolConnect® holder 2x2MX codeveloped with Bender+Wirth in combination with the Cree CXB1512 or Citizen CLU028 4 COBs are mounted directly on the LED cooler. Extra advantage of this is that you lose the thermal resistance of the PCB board, what makes that you can go even up to 6000 lumen in this very dense platform!

The cooling for the platform was developed by MechaTronix and named the CoolBlock® SQ-01 2x2MX. This is a patented advanced pin fin cooler made by die casting, foreseen from an electro plating specifically suitable for outdoor use.

Easy combination of multiple engines into a luminaire lead to endless lumen applications. The building block on itself is a proven concept, both from lighting as from a thermal point of view. Here below an example of a 48.000 lumen stadium light containing 12 pieces of 2x2MX blocks.