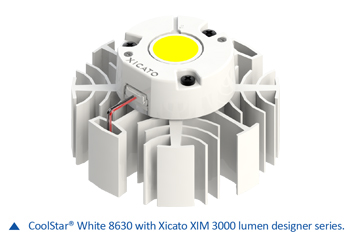 Koen Vangorp “The biggest challenge was for sure to reach the uncompromised cooling performance the CoolStar® stands for without losing the looks we had in mind. It took us over six months and an endless amount of CDF thermal simulations to get to perfection. Certainly in the smallest diameters a very big step forward was made in cooling performance with a gain of over 35% compared to similar diameters on the market. Also this time we played on safe… patenting the whole series according the Hague System, which gives us design protection in all major parts of the world.”

The CoolStar® LED coolers will be presented at the Light + Building show in Frankfurt Germany, while global stock is under production to launch by end of February. MechaTronix is globally represented in 61 countries through 87 specialized distributors and has central warehouses in Taiwan, Hong Kong and The Netherlands.