We have all been witnessing the major ramp-up in lumen per watt outputs in the past years. Of course the more lumen per watt are created, the less energy will transfer in to heat.Still many people are not aware that even with this major evolutions, the current efficiencies of LED COB and modules are still in the range of 30% to 35% , means that still 65% to 70% of the energy goes to heat.

When we would tell lighting designers a few years ago that we are going to create 2.200 lumen in the diameter size of an MR16, they would rise their eyebrows. Today, just a few years after LED spot and down lighting is introduced, this has become pure reality.

Koen Vangorp, General Manager at MechaTronix, unveils a bit of the secrets leading to this new era in LED cooling:

“Many people still see a LED cooler as a piece of aluminium with some ribs on it. The more ribs they have and the more surface they create, the better the result would probably be. The truth is far off from this. In many LED cooling designs, there are just too many ribs too close to each other, making that the air between those ribs gets almost to the same temperature as the ribs themselves,… and as we all know once there is no temperature difference any more between two materials, nothing happens any more. We really hope that in the near future people would look with different eyes to a LED cooler. If I look at what is today standard on the market, then I see for example in a passive LED cooler of diameter 70mm thermal capacity differences ranging up to 30%, what means that by using product A or B you would see temperature differences on the LED of over 15° Celsius.”

“So how do we get 2.200 lumen in an MR16 diameter? Well, by paying a lot of attention to each aspect of cooling under free air conditions. 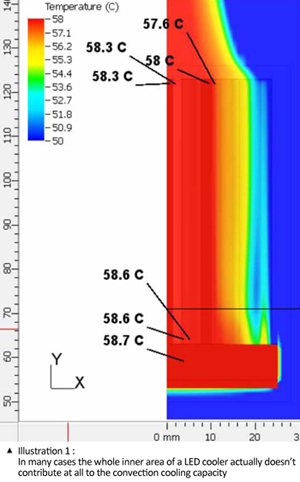 First of all the heat has to be “absorbed” from the LED COB or module towards the whole construction of the LED cooler. This effect is expressed as “conduction cooling”. The parameters which count here are the contact surface from the LED towards the LED cooler, the thermal conductivity of the material used, but also the inner construction of the heat sink. When pins or ribs are too small or too tight, the thermal energy will experience internal resistances against its will to spread through the construction. A massive block of aluminium would do best on conduction, but then the other cooling aspect here below would be at their minimum.

A second effect what occurs in passive cooling is called “convection”. This is probably the best known form of cooling. The temperature difference between the LED cooler and the air makes that the air in the close-by environment will heat up. Hot air wants to rise so cold air comes in place. What influences the efficiency of convection cooling is for sure the amount of surface you can create to touch the air. But also you have to keep in mind that you need space for the air. If the air gaps are getting too tight, then there are barely temperature differences between the cooler and the air, what makes that that area of the cooler you can see as actually not helping at all. In the left illustration you can see that in many cases the outer side of a LED cooler has sufficient temperature difference between the aluminium and air, but all the inner parts is "dead zone",resulting in 35% of the whole mass not having any positive effect on the convenction cooling.

A third aspect which is of major importance in non-forced air cooling, is the radiation effect. It is easy to underestimate the role of thermal radiation as a significant contributor to LED cooling in environments without forced air flow. If well developed, radiation cooling can contribute up to 40% of the total cooling capacity. The radiation is heavily influenced by the “visual” outer surface and the emissivity of the material. When you ever questioned yourself what anodizing or different surface treatments would do with the thermal performance of your LED luminaire, well it influences the emissivity and in that way the radiated cooling aspect. The more the emissivity coefficient nears in to 1, the more ideal. Pure aluminium has a good emissivity in the very beginning, but after a while when it gets corroded drops to below 0.5, while a black or clear anodized surface keeps its emissivity around 0.94.

All the above is just an introduction to the basic elements you encounter during cooling, and which have impact to the performance of a LED cooling design.” 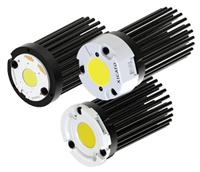 MechaTronix has spent thousands of hours on research, and came up with algorithms which are coming close to perfection to define the ideal mix between conduction, convection and radiation. With this new approach they have developed a new diameter 47mm LED pin fin cooler, and where able to reach a thermal resistance as low as 3.9°C/W. So this new LED cooler can actually dissipate 13 watts of thermal power, or the equivalent of a 2.200 lumen COB at 4.000K, with a temperature rise of only 50° Celsius.

Just a few months ago a similar design would need a diameter of minimal 60 millimeter to get the same performance out of it.

“This new high-end LED cooling approach can lead to some major changes in LED development in a short term” according Koen Vangorp. “Either lighting designers can get 30% more lumen out of the same diameters as before, or they can reduce their overall dimensions significantly. Probably the market is going to move towards size reductions for the same lumen packages, so the designs can be made more compact and elegant than before.”

An extra advantage of this new development is its performance under tilted positioning, like for track lighting applications. The LPF4768 pin fin LED cooler is developed in this way that the open structure allows the hot air to rise without any obstruction, even under a full horizontal tilted position. Most LED coolers like the ordinary LED stars loose about 30% of their cooling capacity once tilted over an angle of more than 50 degrees, what easily leads to 20 degrees higher temperatures then measured under vertical down lighting position.

“The market expectations are great for this new super cooler. A lot of our LED brand eco partners have been asking for developments in this direction, and we are ready to launch the first models for the Xicato XIM and XTM, the next generation Philips Fortimo SLM, the Philips Lumileds Luxeon COB’s and the Bridgelux Vero. The LPF4768 will also be made available for COB’s and LED modules like the Tridonic Talexx Stark SLE, the Vossloh Schwabe Luga Shop and a wide variety of our other eco partners.”

Full details of the LPF4768 LED coolers can be found on www.led-heatsink.com

Samples and stock are available through the MechaTronix worldwide distribution network.