As an extension to the success of the ModuLED modular LED coolers, MechaTronix developed a new family of passive LED heat sinks in a diameter of 70 millimeter, named the ModuLED Nano.

Two new version become available and focus on the medium power spot, track and down light market from 800 to 3.000 lumen. With a thermal resistance of respectively 2.2°C/W and 1.8°C/W the ModuLED Nano coolers show a unique thermal design, based on the ideal balance between creating cooling surface and generating space for free air convection cooling. Even under tilted position of 50 degrees the cooling performance remains unchanged what makes them the ideal cooling source for orientable spot and track light designs.

The ModuLED Nano is foreseen from a variety of standard mounting patterns for all the newest generation LED modules and COB’s.
In this way lighting designers can standardize their designs with a limited number of LED coolers.
Following mounting patterns are foreseen for mounting with self-tapping screws: 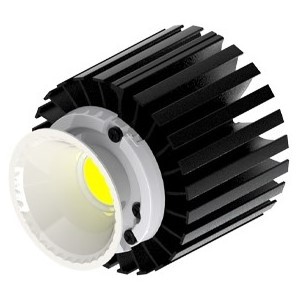 MechaTronix performs thermal compatibility tests of each led module with the dedicated led coolers and publishes this data in the detailed datasheets. By selecting the led module, driving current and estimated ambient temperature designers get the effective case temperature Tc the LED module will become. Since correct thermal management is indispensable for the life span of a LED luminaire, MechaTronix also offers thermal validation of the complete lighting fixture.

Full details of the ModuLED Nano LED coolers can be found on here.

Samples and stock are available through our worldwide distribution network.