With the current lumen boost of many tier 1 LED manufacturers, the demand raised exponentially for ultra-low profile LED coolers for use in height restricted down light applications.

Although the increase in lumen per watt and internal efficacy of recent led COB modules has made the use of passive LED cooling much more likely, most standard LED coolers in the market aimed for classic designs where the cooling surface was created by a smaller diameter with a bigger height.

MechaTronix now launches the ModuLED Mega 13420. With a diameter of 134mm and a height as low as 20mm, this LED cooler performs a thermal resistance of 1.32°C/W or the equivalent of 5.000 lumen.

The challenge in this ultra-low LED cooling profiles comes from the spreading of the heat source to the rest of the design. Creating enough basic cooling surface in a wide diameter low profile LED cooler is not that hard. But the LED COB areas have been shrinked over 40% in the last two years to obtain an easier light image control with secondary optics. Also the power density on that area has significantly increased from 25 watts in a 28x28 package to recently 50 watts and more. With this major change in light engine approach, the spreading resistance of a low-profile LED cooler becomes the focus point to guarantee the life span of the lighting design. 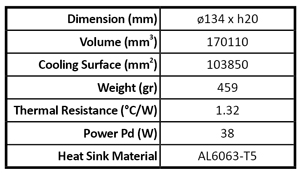 Through advanced thermal engineering and hundreds of hours of thermal simulations, MechaTronix has reached their ultimate goal on this 20 millimeter low profile: a maximum temperature drop of 3 degrees Celsius from the heart of the cooler to the outer diameter cooling area, equivalent for the perfect internal spreading resistance.

To avoid extra costs by after work, the ModuLED Mega is again foreseen from the ground-breaking modularity on mounting holes that allows for very easy attachment of a great number of market-leading LED engines. Looking at the specific purpose of this LED cooler to create ultra-low down light applications with higher lumen packages, MechaTronix has added besides the Zhaga platforms some extra mounting pitches on this design for the Tridonic Talexx FLE and DLE, Osram PrevaLED Cube, Philips Fortimo DLM and a further score of tier 1 LED manufacturers.

Full details of the ModuLED Mega LED cooler are available on www.led-heatsink.com

Samples and pricing can be obtained through the worldwide distribution network www.led-heatsink.com/where-to-buy