New worlds of LED lighting are revealing themselves, worlds we couldn’t dream about just a few years ago…

When Citizen created the “Monster” COB package CLU550, able of creating over 50.000 lumen of light output, it wasn’t so sure yet if anyone would be able to cool it down to temperatures which would lead to the life time this kind of industrial applications would require.

With a dimension of just 38mm by 38mm and more than 500 watts of power, the “Monster” accommodates 936 micro dies. 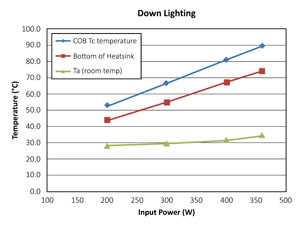 Triggered by this tendency of immense power concentration in a small surface, MechaTronix started mid of 2015 with a complete new approach of high power cooling. They developed their patented CoolTube® heat pipe structure, able of transporting 2 kilowatts per second of heat from a tiny source. That was immediately the heart of their new high bay and industrial cooler, named the CoolBay® Tera. Coming in a diameter of just 19 centimeters and 25 centimeters of height, able to cool down the 50.000 lumen from the Citizen “Monster”, this is by far the most efficient fully passive LED cooler ever developed.

As an industrial lighting designer you can maybe imagine already what kind of new worlds are opening now, with just a few components… a COB, a led cooler, a driver and a handful screws… A warehouse of 30 meters height would still have over 100 lux on the floor, a building of 50 floors would suddenly look totally different when you beam the light up,…

This tendency of immense power and light output on a small surface is for sure a new trend going on in the LED market. Besides development of extreme high power COB modules, also the rise of flip chip and CSP (Chip Scale Package) LED emitters enable this markets. With the much lower thermal resistance of CSP emitters and the major reduction in size, this technology is extremely suitable for building compact high power engines. This again emphasizes the needs of advanced thermal management like MechaTronix is focusing on.

More information of the patented CoolBay® led coolers can be found at www.led-heatsink.com