The patented CoolBay® High Bay Cooler might look from the outside as a normal extruded LED Cooler, but is actually a state-of-the-art heat pipe cooler for high density power sources. In the heart of the cooler, the patented CoolTube® heat column is embedded, which guarantees the fastest heat transport ever from a small LED source. In this way we can cool down powerful COB or LOB LED engines as high as 30.000 lumen. Starting from a small light source has an enormous advantage when you look at the photometric objectives. The biggest advantage of these high bay designs over UFO designs is the perfect optical controls you get. With the small LES area of the COBs or LOBs the combined lenses give you a perfect light image, from an installation as high as 20 meters to a low ceiling with specific batwing lenses. An extra advantage of this approach is the very low glare what you get, which creates extra comfort to the employees working in that environment.

Also the overall looks of the design have been taken into account. The heat sink around the core is designed in this way that it has the same diameter and looks as the circular LED drivers which are mounted on the top of them. These circular drivers are available from global leading driver manufacturers like Mean Well (HBG-series), Inventronics (EUR-series) and Moons (MT- & MU-series). The drivers are mounted to the LED Cooler with our own spacer brackets, which make sure the free air convection of the LED cooler is guaranteed, but even more important, which ensures that your driver doesn’t get warmed up from the heat of the LED cooler. 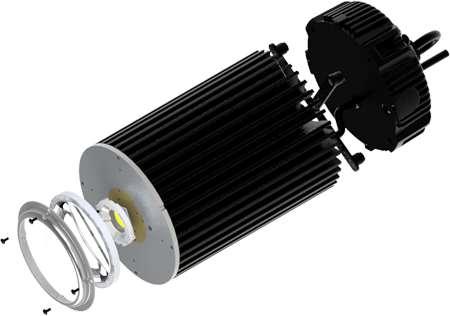 The CoolBay® has maybe made its name and fame as a high bay LED cooler for high-end white light applications like in warehouses, but is also worth the consideration as a horticulture top light cooler. While leading LED brands like Lumileds, Cree and Citizen have developed specific COB LED engines for high power horti top light applications, these again go perfect along with the CoolBay® platform. With the Osram Opto Semiconductor co-developed CoolGrow® in combination with the CoolBay®, you get 375μmol/s in the PAR spectrum out of a single 150 watt LED engine. When you combine that with batwing lenses like the Ledil Stella, you get the perfect straight-forward compact top light for your horticulture application.