MechaTronix was formed in 2007, comprised of five already successful manufacturing companies, with each of them in excess of a decade of continuous operation. MechaTronix provides a wide variety of mechanical and electromechanical parts as well as assemblies for the international Original Equipment Manufacturers market.

Starting off with the production of metal and plastic enclosures for electronic applications and the assembly of half-products and elaborate cables, MechaTronix utilised several production processes, amongst which die casting, forging, extrusion and plastic injection.

The application of secondary processes such as CNC grinding and cutting and finishing such as anodising, painting and silk screen printing enable us to offer a very high degree of customisation and personalisation to our customers. It was through the expertise in these processes that MechaTronix found its stride as a serious contender in the market of heat sinks and cooling engines. What started as a one-off venture into the extrusion of aluminium heat sinks resulted in a very comprehensive package of cooling solutions for the booming international LED market.

In 2016 the knowledge made an extra jump with the acquisition of Cooling House, based in Taipei Wugu. Heat pipe and loop thermosyphon technology opened the doors to industrial and horticulture LED applications.

Nowadays, MechaTronix is the preferred cooling partner for world leading LED manufacturers and designers, with an offering of heat sinks and cooling solutions for every conceivable LED application. To service the international markets and meet the exploding demand for its products, MechaTronix formed an international distribution group.

Through these localised professional partners, MechaTronix’ products are readily available all over the world. With MechaTronix Europe started up in 2017, now also standard LED coolers are off-the-shelf available from the Dutch warehouse, as well as contract management is introduced with local stock in Europe close to the customers base. 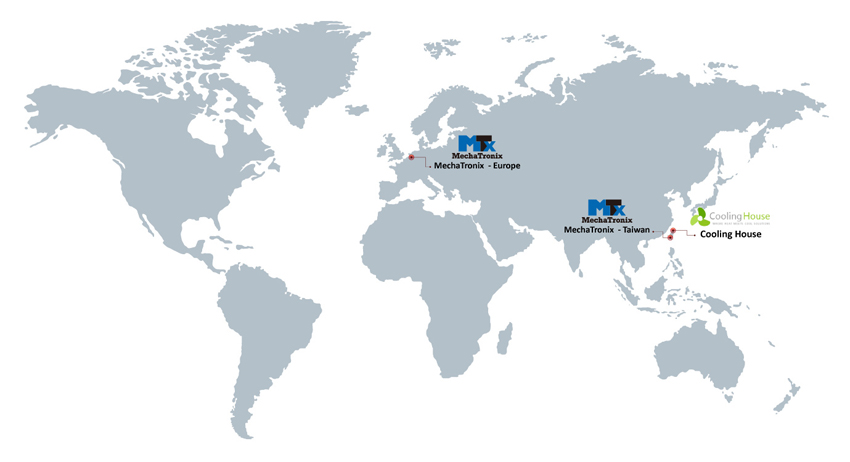 With the evolution of LED lighting over the last years, the demand for professional thermal solutions has grown exponentially. And now that we no longer remain in the realm of low power LED’s, thermal management becomes a critical factor within LED fixtures. To that end, MechaTronix has developed several series of pin-fin and star heat sinks, manufactured through die casting, forging or extrusion. This has resulted in a comprehensive range of more than 400 off-the-shelf available LED coolers, for passive or active heat dissipation.

After initial reservations concerning active LED coolers, specialists have found that there really is no better option, when closing in on the 8000 lumen mark. Admittedly, the fan’s lifespan becomes somewhat of a focal point in the application of an active LED cooler, but given that the lifespan of the LED engine itself dramatically decreases at high temperatures, the lifespan of the fan looks rather favourable all of a sudden. 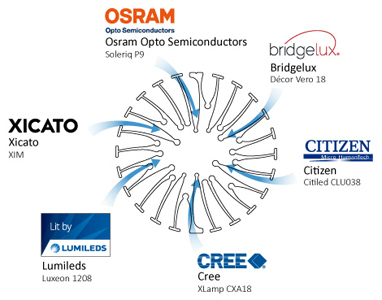 MechaTronix’ ground breaking ModuLED coolers and its actively cooled sibling IceLED have garnered a lot of attention and positive reviews in the LED market. ModuLED and IceLED are just precursors of a complete range of dedicated and highly effective LED coolers for professional deployment in spotlights, downlights, high bays and a further score of architectural and utility LED applications.

Both ModuLED and IceLED, as well as their upcoming descendants are Zhaga-ready and have a matrix of mounting holes that allows for very easy attachment of a great number of market-leading LED engines. Simply apply a thermal interface of your choice, put the LED engine in place and fasten with self-tapping screws and you are good to go! No drilling, customisation or special mounting brackets are needed.

Thanks to an extremely thorough thermal verification of all heat sink lines, MechaTronix provides total thermal disclosure for each model, coupled with several brands and categories of LED COB’s and engines. All thermal data is available in the product specifications, that come with every MechaTronix heat sink. In this way, engineers save time and effort during the design stage of their LED fixture and will significantly shorten their time to market.

In conjunction with several world leading LED manufacturers and other stakeholders in the field, MechaTronix whole heartedly supports the emerging Zhaga industry standard. To that end, many off-the-shelf MechaTronix heat sinks - passive as well as active - are compatible with these Zhaga specifications, making them instantly ready for assembly with Zhaga designed LED engines or secondary optics, such as lenses or reflectors.

Despite Zhaga’s efforts, the international market still offers a great diversity in unique mechanical formats for LED engines. MechaTronix appreciates the need for LED coolers to be modular plug and play components, matching all varieties of LED engines and secondary optics. 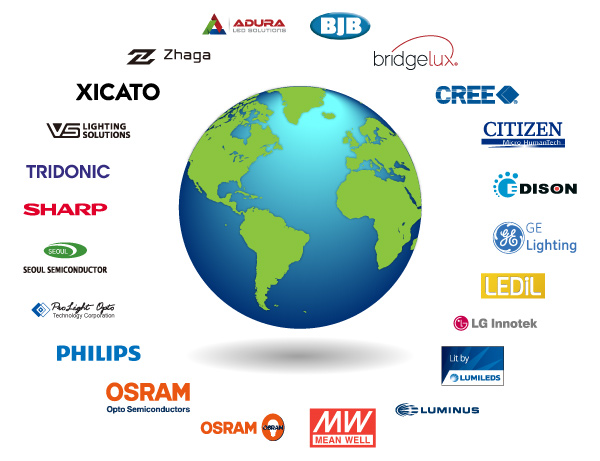 Not surprisingly, MechaTronix has been able to forge strong alliances with - and establish specific heat sink ranges for many leading LED manufacturers. Amongst these are the likes of Bridgelux, Citizen, Cree, Edison, GE Lighting, LG Innotek, Lumileds, Luminus, Osram, Osram Opto Semiconductors, Philips Lighting, Prolight Opto, Seoul Semiconductor, Sharp, Tridonic, Vossloh Schwabe and Xicato. Countless hours of compatibly testing enable us to present you with complete and validated thermal data of all feasible combinations of heat sinks and LED engines.

As a result of these efforts, MechaTronix has found a score of LED manufacturers and other specialist parties in the business to form ECO partnerships with. The mutual sharing of data and R&D and the adherence to Zhaga specifications comes with great benefits to all involved, not forgetting the end users. MechaTronix now is being endorsed as the preferred brand of heat sinks within these ECO Partnerships, guaranteeing a perfect mechanical fit, reliable thermal performance and an overall aesthetic design.